Whether you’re a young, creative YouTube creator or a seasoned video games development company, you may from time to time look into the option of downloading royalty-free music for use in your project.

When comparing the use of royalty-free music (also known as stock music, or production music) to the option of hiring a music composer/creator to compose the music especially for your project, there are advantages and disadvantages to either option.

Hiring a composer to create music especially for your film or game:

Hiring a music composer to create music especially for your film or game is called a «Bespoke music» agreement.

Using royalty-free music in your film or game: 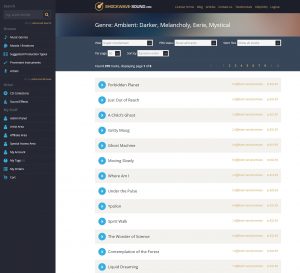 Using a royalty-free music site you can search or browse for music already made and ready to use. In this example, 379 tracks were found in the genre: Ambient music; Darker, Melancholy, Eerie and Mystical.

Having said that, if you choose to license you can to some degree control the way the music «builds» and changes within your project, by layering different stems at certain points on your timeline, or according to certain events or areas in your game. You may wish to read a bit more about the possibilities opening up when using production music with stem files

Things to keep in mind when looking for royalty-free music

If you do go down the road of using royalty-free music or stock music in your film or game, there are some things to consider, to make sure you (A) stay out of legal trouble and copyright issues, and (B) ensure you get the best quality music and the best end result for your project.

Firstly, consider using music from a reputable royalty-free music site, rather than the cheapest option available. At least try to make sure that they have a system in place for vetting composers for copyright safety, and that they curate and take care of their music catalogue.

There are many royalty-free music websites out there who practice a kind of free-for-all self-uploading of music content by anybody who wants to think of themselves as a musician. People can literally sign up and start uploading their content in 5 minutes, and that content goes directly out to customers without anybody even listening to it. The result is a mish-mash of music of wildly varying quality levels, from great to terrible and everything in between. These sites may be cheaper than more reputable and more serious music providers, but 1: Nobody checks the legality or copyright situation of the music that gets uploaded. It can well be music stolen from some other copyright owner. And 2: Nobody checks the artistic quality or production quality of the music that’s put out in front of customers, so you may have to spend hours wading through mediocre, poor, or even sometimes downright awful music, before you find something good.

If you use a royalty-free music service that works, perhaps in a bit more traditional way, where they have a roster of artists who they get personally involved with and they guide these artists somewhat, discuss projects with them and so on – then you are much more likely to be browsing through a smaller selection of music, but generally it will be music clips of a much higher quality overall. Perhaps that’s worth a few dollars more.

The YouTube «copyright claim» is a phenomenon that has certainly come to stay and we’d all better just find a way to get along with it.

You might think that if you license royalty-free music and fair and square pay for a license to use the music, you will never have to deal with a copyright claim on your video; but it’s not as simple as that. Because YouTube doesn’t necessarily know that your YouTube channel is specifically licensed to use that particular piece of music, an automated copyright claim may – in fact, it probably will – occur. If and when that happens, again, it’s a good idea to have used a reputable and serious provider of that music, because in that case, it’s just a matter of contacting them, referring to your license, and asking them to have the copyright claim released from your video. Usually this will be taken care of in a matter of hours, or sometimes even minutes.

Well, it may surprise you, but no, not necessarily! Like I said earlier in this article, people will do anything to try to make a buck, and one of the things they will do is to rip music out of films and games, and then claim that music as their own.

As a music composer myself, I have experience with this: I composed music especially for a video game. The game publisher put the game, with music playing, in a YouTube video and uploaded to YouTube. No problem. No copyright claim. Months later, suddenly a copyright claim appears on the video, claiming that the music is «such and such» track by the artist «so and so» and published by «this and that» company! All names that are completely unknown to me. So it turns out that some dishonest person took the music from the game, renamed the music to a different title, and then went ahead and released that music as his own. He then put that music into Content-ID and, of course, now even the actual real composer and music owner starts to get copyright claims on the music, even claiming it belongs to somebody else.

In summary, I think we can say that there is nothing you can do to make absolutely sure that you will never have to face a copyright claim on YouTube. If and when a claim does appear on your video, hopefully it will be just a small amount of straightforward administration to get it released – such as using the YouTube dispute process, or contacting the friendly and helpful staff at the reputable stock music business where you bought the music, and asking them to release the claim for you. 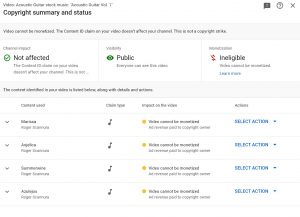 When a YouTube copyright claim occurs, your video will most likely not be blocked or muted or anything. Instead, some advertising will start to play before or during your video, and the claimant (copyright owner) will make some «micro income» on that advertising. To get the claim released, contact the music provider who licensed the music to you and they should be able to help.

Using royalty-free music instead of hiring a composer to create a soundtrack for your game, app or video may be a good option, especially if your time and resources are limited. But there are some pitfalls and some things to consider, so don’t necessarily just go out there and thoughtlessly pick up a cheap royalty free music track without giving it some thought first.

Bjørn Lynne is a Norwegian music composer, producer and sound engineer. Bjorn has composed the music for a lot of video games (including the legendary «Worms» series of games), DVD’s, films, videos and live stage productions. He lived and worked 10 years in the United Kingdom but later moved back to his native country, Norway, where he now writes music in his home studio and is an eager recreational tennis player and yoga novice.